It was a three-nave church with three projected apses and wooden statues of St. George and St. Euphemia. In the beginning of the 17th century, a new gold-plated stone statue was erected which until this day remains on the altar of the Saint. 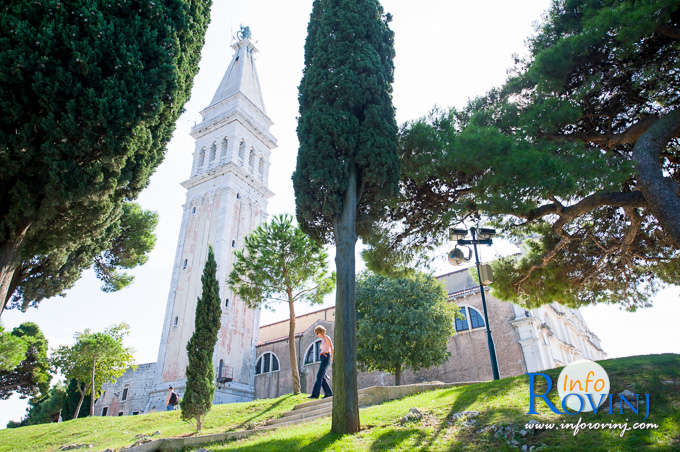 The church itself required with time more and more reparations, and the town population grew, so that the people of Rovinj decided to build an even bigger church. The building process started in 1725, and lasted until 1736. Three main altars were built in 1741, and the organ was installed in 1754. The façade was designed and built in the second half of the 19th century. Many altars and paintings enrich and embelish the church from within.

We will mention the most important ones. When you enter the church, you will first notice the main altar of St. George, St. Marc and St. Rocco with the statues of these three saints built in 'karar' marble, designed by a Venetian master sculptor Girolam Laureat. On the left side, there is the altar of the Holy Sacraments, rich in marble and embelished with statues of angels. On the right side from the main altar, you will see the altar of St. Euphemia, the patron-saint of the town, a part of the church which all visitors should see.

The altar itself is rich in marble, the stone statue of the Saint dates from the 15th century. Behind the altar you will see a sarcophagus in which relics of St. Euphemia are kept. On the walls by the sarcophagus there are paintings dating from 1883, painted by Leonardo Riga. The paintings depict the arrival of the sarcophagus to the coast of Rovinj and the martyrdom of St. Euphemia. On the ceiling there is an image of the coronation of the Saint up in the sky. On the right (southern) side, there are altars of the Lady of the Holy Rosary, St. Francis of Assissi, St. Peter and St Michael the Archangel. On the opposite, northern side, there are: the altar of St. Nicholas, the baptistery, and the altars of St. Sebastian, the Lady of Carmel and St. Rocco.

From the collection of paintings we should mention the images of St. Anthony of Padova, St. John the Baptist, St. Francis of Assissi, and the Holy Virgin Mary. Beside the church there is a bell-tower, built 70 years earlier and designed like the bell-tower of St. Marc in Venice. On the top of the bell-tower there is a statue of the patron-saint, placed on bearings so that it revolves around its axis depending on the wind. The bell-tower and the statue reach the height of more than 61 meters. At the bottom it is a little bit less than 9 meters wide. There is a beautiful view of all Rovinj area from the bell-tower, and sometimes when the weather is good one can even see the Alps. The church itself is 30m wide and 51m long.