Life in the sea - fish

Its body is deep and dorsal. It can be 60cm long and weigh up to 3kg. Larger specimens are rare. Its average catching weight is about 0.10kg. It lives mostly in schools, on sandy, shell, or muddy sea beds. It has a nice pink and reddish colour, and tender and very tasty meat of high-quality. This fish is very frequently eaten.

There are 6 species of mullets and the grey mullet is the most widespread one. It can reach 75 cm in length and weigh up to 6kg. Its average catching weight is about 0.30kg. You can find it along the whole Adriatic coast, but it usually lives at mouths of rivers, in smaller rivers and in lakes connected to the sea. It usually stays in muddy shoals. This fish lives in small schools, which grow when the fish spawn This fish caught in great quantities and has very tasty white, tender, semi-fat meat with soft bones, which is rare. The best way to prepare it is to grill it. Many don't rate it very highly because it likes to live around harbours and near sewerage systems. Nevertheless, when caught in fresh water it is a very flavourful and light food. 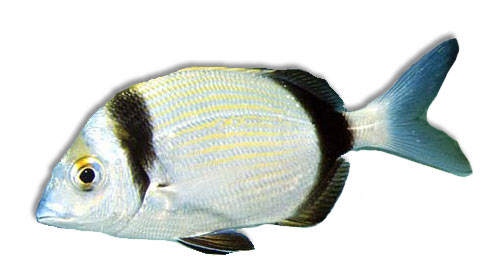 This is another shellfish. It can grow up to 40cm, and weigh up to 1.30kg. Its average catching weight is from 0.05 to 0.10kg. It feeds near muddy and sandy sea-beds, and sometimes lives in small schools. Its meat is very flavourful and in great demand, especially larger specimens. It can be grilled, fried or boiled 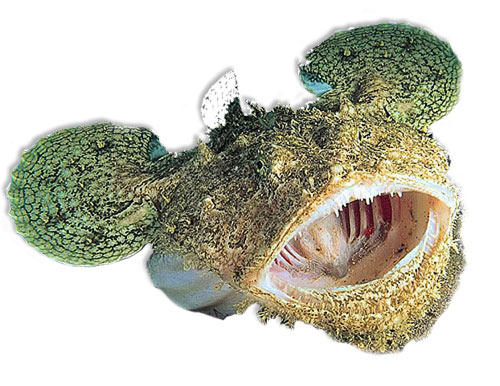 A fish of the Lophiidae family. It can be up to 200cm long, and weigh over 40kg. Its body is awkward, with no scales and with an enormous flat head. Its oral cavity is strong with an extended lower jaw. Its jaws are filled with needle-shaped teeth. It lives on muddy and sandy sea-beds. Its relative, the Frogfish or Black-bellied Angler, which can be 70cm long and weigh 8kg (though its average catching size is around 0.50 kg), is more widespread. It hides in the sea bed: usually it digs in, waiting for its prey and using the feeler on its head as bait. It has very tasty meat. Smaller ones are usually stewed, and the cooked head of larger specimens is a real delicacy, while the tail part can be coated with egg and breadcrumbs and fried or grilled. When cleaning the fish, besides the entrails, the slimy skin should also be removed. 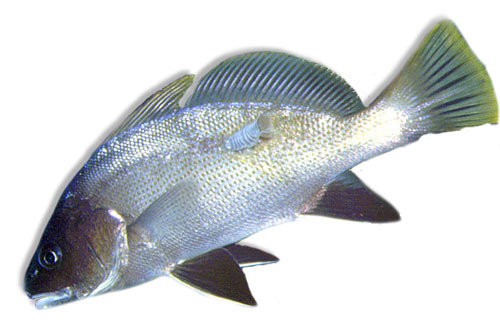 This is a very shy fish, so it can rarely be seen in the open. It lives in craggy coastal areas and underwater reefs, where it can hide in holes and crevices. Its meat is tasty, juicy and tender, which makes it very popular. Whether boiled, fried, grilled or stewed, it is equally good. 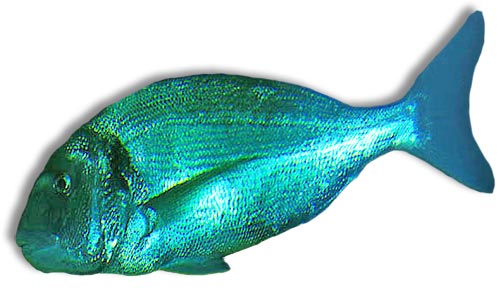 The Queen of Fish, as fishermen like to call this fish, can be up to 60 cm long and weigh up to 10kg. Such specimens are, of course, very rare and not many can say they have seen one, not to mention caught one, since this is an extremely intelligent fish. Its head and jaw are extremely strong because it feeds on shells and snails, and it can even grind some smaller crabs. Its top-quality meat makes it one of the best white fish, which is why it is very popular and regularly appears on the menus of almost all fish restaurants. It is very suitable for artificial breeding, just like Sea-Bass, and the Limski canal confirms this by being a highly successful breeding site. It can be prepared in every possible way, but usually it is boiled or grilled. 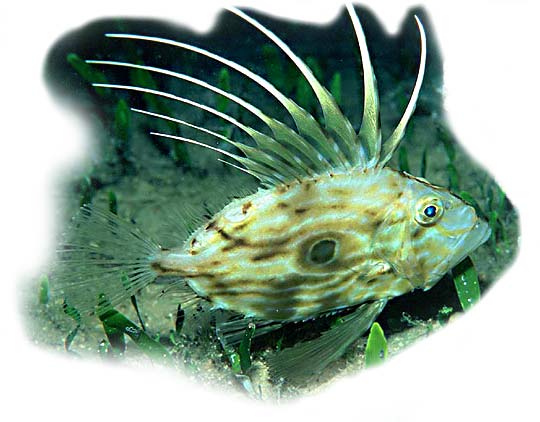 This is a fish of an unusual and peculiar shape. It has no economic importance, because it is not caught in large quantities. It can weigh up to 3kg, but 0.5kg is its average weight. It has tasty and highly valued meat. It can be prepared in almost every way.

Can be up to 50cm long and weigh up to 1kg. 0.2-0.25kg is its average catching weight. It lives on the sandy and muddy parts of the Adriatic’s seabed, mostly near the west coast of Istria. It lives in scattered schools. It is a night fish, and during daytime it digs into sand or mud. Fishermen catch it by using a special kind of net called a 'pašarela'. The fishing season is in the autumn and in the winter. It is of notable economic importance because of its high market price and has a good catch, mostly for export Its meat is highly rated and tasty. It is usually served fried, grilled or coated with egg and breadcrumbs and fried. Before cooking, fillets can be made by removing the skin, the spine and the fins.

This is one of the most popular types of white fish, because of its top-quality and tasty meat. The largest specimens grow up to 1m long, and can weigh as much as 14kg. Its average catching weight is around 0.5 to 1kg. It lives in shallower water sand likes areas where freshwater flows into the sea, so it can swim through the mouths of the rivers and into the river courses. It is a very greedy and voracious fish, but cautious and shrewd at the same time. Fishermen use different tools and methods when they are trying to catch it There are different ways of preparing it, but medium-sized ones are best when they are grilled. It can be boiled roasted in an oven, wrapped up in foil or prepared with potatoes, and bigger ones are excellent as salted fish or carpaccio-fillets. People breed this fish very successfully on fish farms, of which the the Rovinj aquatorium on the Limski Canal is one of the better-known examples . However, the meat quality cannot be compared to wild Sea-Bass meat.

It can be 45cm long and weigh 2kg. Its average catching weight is around 0.15kg. It can usually be found on sandy and muddy sea beds, and it likes muddy and slightly saline water. The areas where it is most frequently caught are the Limski canal and Tarska cove. It feeds on various animals which it finds on or in sandy sea beds. It has top-quality meat. 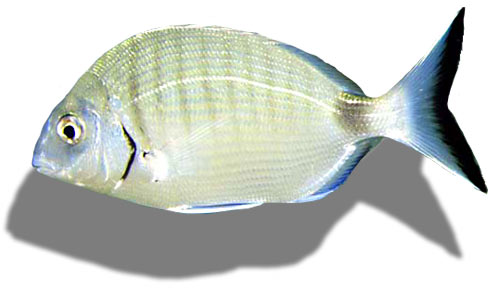 This belongs to the same family as the White Seabream but it is more highly rated. It can grow up to 47cm and weigh as much as 2.5kg. Its average catching weight is about 0.15kg. Its meat is very tasty and popular, and it stands shoulder to shoulder with Gilthead Seabream, Dentex or Sea-Bass. It is prepared in different ways. It is of average economic value, and can rarely be found in the fish market, because most of the catch (especially larger specimens) goes directly to restaurants. 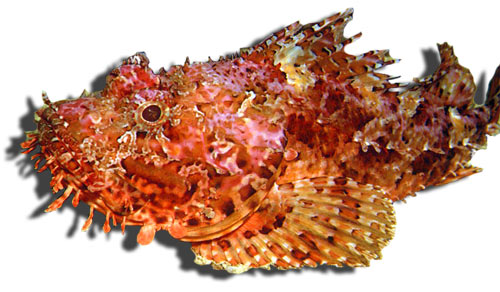 Scorpaena scrofa It can grow to 66cm long and reach the weight of 5kg. Its average catching weight is around 0.25 kg. It can usually be found at a depth of 20-60 metres, in rugged areas or in and around shipwrecks. It has an ability to adjust its body colour to its environment, and its body shape merges with the environment as well (mimicry). It has white meat, very tasty and popular. It can be prepared in many ways, but it is compulsory in a fish stew (brodet). Larger ones are excellent roasted, with some white wine added, and served with some potatoes and vegetables.

Remark: Caution is needed when catching and cleaning this fish, because it has a spine filled with poison, which makes its sting very painful. The poison is thermally unstable and destroyed in cooking. 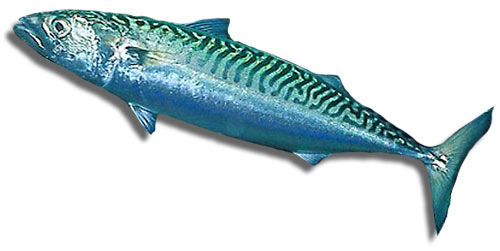 Its maximum length is 45 cm, and it can weigh up to 0.9kg. Its average catching weight is around 0.07kg. This is one of the pelagic fish. It is spindle-shaped and a swift swimmer. It mostly lives in schools in the open sea. People catch it the same way as sardines. It is economically important (for fish canning and processing), though the catch has not been very good during the last few years. Its meat is very tasty and quite oily. The best way to prepare it is by grilling or frying. 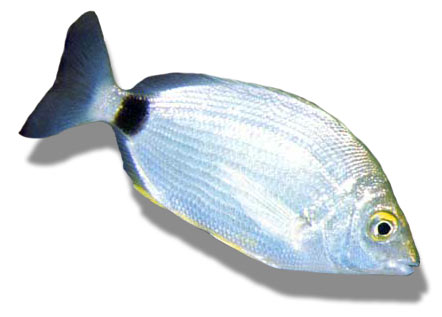 This is a small fish from the Sparidae family with no special economic importance. It is usually caught for household needs. However, when fried it becomes a real delicacy, especially larger ones, since it has many small bones. It can be 22 cm long and weigh about 0.35-0,.40kg, but on average it weighs about 0.03-0.05kg.

This is our most important food fish (yearly catch amounts to 60% of total annual catch of saltwater fish). This is a typical example of a pelagic fish. It is usually caught with circular floating nets and trawls the whole year round. Fresh Pilchard, fried or grilled, is the best, but it can be prepared in all sorts of ways (coated with egg and breadcrumbs and fried, with a savoury marinade, salted…), but it is mostly used in the food processing industry as a canned product. In addition, large quantities of this fish are used as food in tuna farms in Dalmatia. 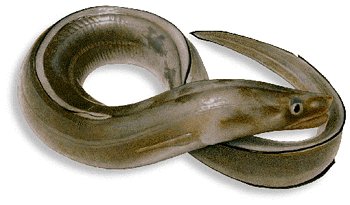 This is a snakelike fish and depends on the bottom of the sea for its survival. It finds its hiding places among underwater reefs and objects like shipwrecks from where it comes out at night to hunt. This is a major predator, which feeds mostly on fish and cephalopods, but it can even swallow a small lobster or one of its own kind. The biggest specimen ever caught in Croatia weighed about 80kg and was caught in the Velebit Channel with a special kind of fishing net. Its average catching weight is from 0.5 to 5kg. To catch it, a fishing trap or a ‘parangal’ should be used. The best way to prepare it is in a stew, but it is excellent when it is grilled, fried, coated with egg, breadcrumbs and fried, or dried and smoked. 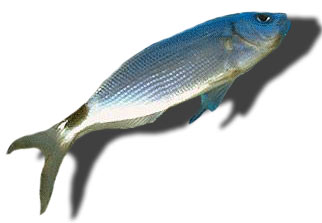 This is a less representative member of the shellfish. It can reach up to 30cm in length and weigh up to 0.60kg. Its average catching weight is about 0.1kg. This fish is very common around the Archipelago. It lives in scattered schools. In spite of its small mouth and undeveloped jaw, it is an outstanding predator which attacks everything that moves and is not too big to make a nice meal. Its meat is tasty, tender and easily digestible. It is very common on fish markets and it is frequently eaten. 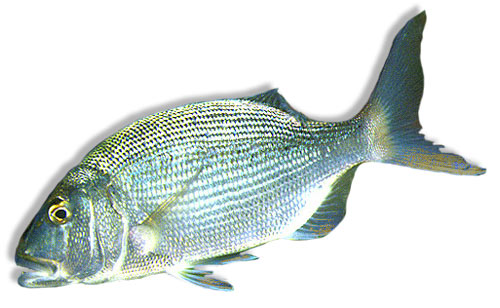 If the Gold Fish is the Queen, then the Dentex must be the King. This is a true predator among fish. It can reach 1m in length, and weigh 1 kg. Its average catching weight is about 1kg. It is strongly built: its head and the front part of its body particularly stand out, with strong jaws and sharp teeth, and eye-teeth which would even put some larger land predators to shame. It mostly eats fish, which it mercilessly chases all the way to the shoal or to the water's surface, but it will eat crabs and cephalopods as well. Like a typical predator it attacks everything that moves. This fish is highly rated for its tasty meat, though the meat from larger specimens is somewhat dry. However, with a small amount of cooking skill, even the largest Dentex can become a meal people will talk about for days. The cooked head of larger ones is a speciality, and smaller ones should be grilled (2kg maximum).