The Adriatic Sea is characterized by high biodiversity. Unfortunately, the living organisms in the Adriatic and their habitat are all in danger because of pollution from sewage, oil and heavy metals, the irrational exploitation of living resources and the legislation in everyday use of the sea, waste disposal, remediation and construction projects on the coast, artificial breeding of marine organisms, etc. As a result, some species are missing, some survival is seriously threatened, and there are many populations of marine organisms in thinning. The sea is not an inexhaustible resource with unlimited power of self-regeneration.

Besides being a tourist landscape, the sea has another dimension, that requires our understanding and protection. This is precisely the issue. The Act on the Protection of Nature protects all sea turtles, marine mammals, pen shells (Pinna nobilis) and snails strips miter (Mitra zonata) and Triton (Triton's trumpet). It is not allowed to take, disturb or trade in these species! 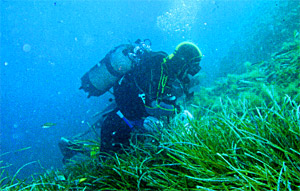 Meadows of Posidonia Oceanica are areas of high biodiversity in the Adriatic. Because of pollution, anchoring, trawling and other reasons, this marine herb becomes increasingly withdrawn and is disappearing thus threatening the entire fauna of these meadows. Contribute to the preservation of this community by not anchoring above the meadows of Vogue! The launch and the withdrawal of anchors lead to irreparable damage to seagrass meadows. Seagrass meadows are the main producers of oxygen in the water, and for this reason they are called the lungs of the sea. Not long ago, numerous and dense, the areas covered with algae in the northern Adriatic are rapidly disappearing.

On the surface the devastation that occurs due to overfishing of dates is not seen. Their delicacy can not be an excuse for the senseless destruction of underwater life. The amateurs of dates probably do not know the degree of devastation that causes their culinary delight. Because of the breakdown of rocks it irreversibly destroys the rocky coast. Therefore, the Law on fishing in Croatia prohibits fishing and trade of dates. Do not accept the dates offered in restaurants because in this way you are violating the law and contributing to the destruction of the Adriatic coast!

The species is endangered in the Adriatic Sea. This good-natured and gentle sea creature is one very easy prey for divers who do not realize that living things are not souvenirs. Do not help the killing of seahorses buying dried seahorses as a souvenir!

This mussel is a protected Adriatic species that inhabits the sandy bottom. It is a common inhabitant of the meadows of sea grass, vogue. With the development of tourism its habitat is in danger, mainly because of the extraction of its shells that are used to create decorative items and souvenirs. It prohibited the extraction and sale of these shells! 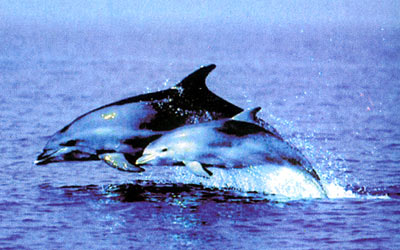 Dolphins are the species whose survival is endangered due to human activities at sea, overfishing and pollution. Dolphins, with hearing, identify and capture their prey, communicate and orient themselves with the creation of a noise map of the area in which they move. Most of the sounds produced by ships, in particular the sounds of propellers, overlap with the frequencies used by dolphins. Because of this interference, they sometimes leave their favorite places where they seek food and where to stay with their young, and noise produces stress to the dolphins. Since 1995, the Dolphins are a protected species in Croatia, but that's not enough. Without the awareness and knowledge of the rules of conduct no written laws can be quite effective: the dolphins should not be chased and ships must not be guided directly towards them. Dolphins can be approximated very slowly, keeping parallel to their direction of movement and avoiding sudden changes of direction and noises. You should turn off the engines. Within 100 meters from the dolphins there mustn't be more than one ship, 200 meters up to three. When you leave the area, you must accelerate gradually and only when you are at a distance of 100 meters.

Collecting marine organisms such as sponges, shells, starfish, sea urchins, snails and other are non-prohibited. These violations are "benign", but they reveal their true nature only when multiplied by a thousand, ten thousand times!!! Do not forget that they are living beings rather than souvenirs or toys for children! Aren't they beautiful in the sea - in their natural environment?! Preserve the memory of these marine organisms! Do not take them out of the water. Instead, enjoy the view of these organisms while you immerse yourself in the sea or buy their photos. Do not disturb them with underwater powerful lights.