It is hard to say with 100% certainity in which period Rovinj developed. For the first time it is mentioned in a work named "Cosmographia" by an anonimous inhabitant of Ravenna, who wrote about "Castrum Rubini" from the 5th century. 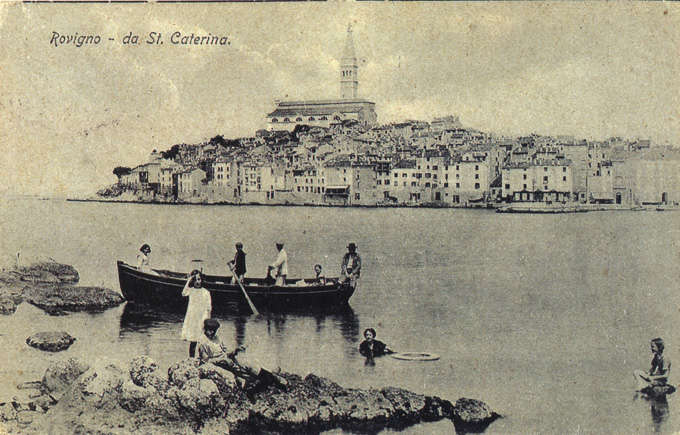 It is very likely that Rovinj is much older, emerging somewhere at the turn of the 3rd and the 4th centuries, and maybe even at an earlier period, since in the 1st and 2nd century B.E. proofs of life on the island had been found. "Castrum Rubini" was certainly located at today's site of the parish church of St.Euphemia. During this period, Istria was occupied by the Romans who stayed there until 476, when the invasions of the Huns, the Ostrogoths and in 539 of the Byzantine started. The inhabitants refuged to the island of Rovinj (Ruigno, Ruginio, Ruvigno) which at that time had around hundred inhabitants. Nearby, a place named Cissa existed, the so-called Rovinjian Atlantis, which probably somewhere in the 6th or 7th century sank as a consequence of an earthquake, so that the inhabitants of Cissa populated the island of Rovinj. Regarding the existence of Cissa many legends overlap, although its existence has never been proven. Cissa is still alive in the stories of local fishermen, whose nets very often catch a fragment of an amphora or a brick on the place where the town supposedly sank.

After Byzant (788) Istria fell under Frankish rule. During the 9th century, it was invaded from the sea and from the mainland by various robbers (Slavs, people who inhabited the Neretva area, Saracens). Istria experienced a very turbulent period between the 9th and the 11th century, since the properties often changed their owners and the cities started their struggle for autonomy and founded a municipal structure in opposition to Istria's church and feudal ruler - the Aquileian patriarch. At that time Venice, a very strong maritime republic, grew stronger, under the power of which Rovinj fell in 1283. In this way, the local government in the town was limited and the Venetians put their own man in the leading role in the town. During Venetain times, Rovinj was developing into a strong fishing, shipbuliding and maritime center, especially in the 17th and 18th century when they had the precedence over Istria. At that time the town walls were secured, the town started to expand itself to the mainland, so that in 1763 the channel between the mainland and the island was covered up and Rovinj became a peninsula. 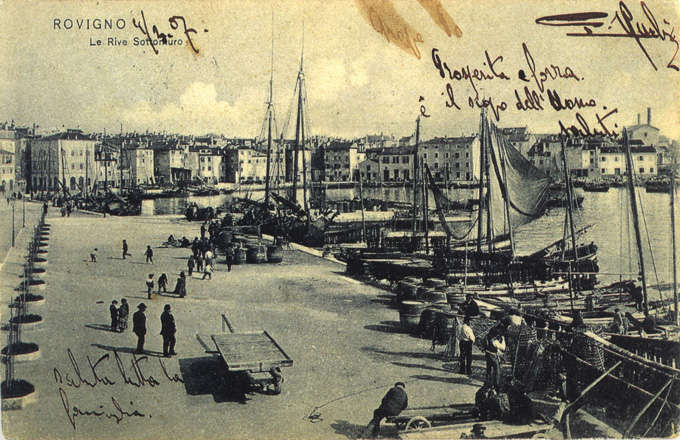 In the mid 18th century Rovinj had more than eight thousand inhabitants and thus there were also more houses than there used to be in other similar towns at the Adriatic Sea. Because of the high number of inhabitants and pilgrims, today's parish church St. Euphemus was built. In 1797 the Venetian republic lost its power and for a short time Istria is first under Austrian (until 1805) and then under Napoleon's rule. From 1809 to 1813 Istria was a part of Napoleon's Illyrian provinces.

In 1813 the Austrians took their power back and a period of industrial and urban development started. In 1852 Rovinj built cement production facilities, in 1872 a tobacco factory followed, in 1878 a wax factory was built and in 1882 a glass and sardine factory were erected. At that time, the shipbuilding industry was in full stride, and the southern part of the town even had six smaller shipyards, of which one is still working today. In 1865 Rovinj built a theater as well, in 1888 a hospital was built and in 1891 the construction of a Sea biology institute followed.

At the end of the century, Rovinj was connected by a railway line, and as early as 1905 light gas was introduced, and one year later the city telephone followed as well. It is interesting to mention that by the end of the century (in 1890) one of the islands of Rovinj's archipelago, today's Red Island, was bought by the Japanese consul in Trieste, J.G. Huetterott.

Many inhabitants of Rovinj went to Pula in the 19th century, which at that time was the biggest naval port in the Austria-Hungary monarchy.

Nearby Rovinj the most well-known wreck from Austrian times is located - Baron Gautsch. When the monarchy fell apart, Rovinj fell under the fascist Italy at the end of WW I (1914 - 1918) and remained under that rule until the capitulation in 1943, and by the end of WW II the town remained under German occupation.

In the second half of the 20th century Rovinj was, like the whole of Croatia, a part of Yugoslavia, which lasted until 1991, the year of big political changes, when Croatia started its journey towards independence and the acknowledgement of which followed in January 1992. For the past few centuries, the number of inhabitants fluctuated between 12 and 15 thousand, and today the town officially has a number of 14.234 citzens.

In the past 40 years Rovinj has developed into a real tourist center thanks to its nature, the well-indented coast and a large numer of islands, an interesting surrounding, its pleasant mediterranean climate, the variety of accomodations and tourist attractions and its cultural-historical values. All of this makes Rovinj an ideal holiday destination, which has been proven by many acknowledgements by a large number of guests and by many awards of various tourist associations and patrols.