Life in the sea - Cephalopoda

A cephalopod with an elegant and aerodynamic shape and a gentle and slimy body. A transparent horny internal shell gives it its firmness. It has the ability to change colour and release black fluid. It can be up to 1m long and weigh 3kg. An average specimen weighs about 0.20kg. It is a deepwater resident, and in autumn and winter it comes near to the shore. It feeds on small fish. It is prepared in many different ways, but mostly cut into small pieces and fried or filled with various spices and ingredients. It is excellent prepared as a pilaf.

This is a cephalopod of the Octopodae order. Its body is soft and flexible, with no shell. It is brown with black spots but is also changeable: it has the ability to adapt to the colour of its environment. It can be up to 40 cm long, and weigh up to 0.5kg. An average specimen weighs about 0.15kg. Its habitats are sandy, shell and muddy areas 5 to 50 metres deep, but it can dive as deep as 200 metres under water. It is often confused with a small octopus. It is mostly caught using deep-sea fishing nets, and quite often exported. It is usually prepared cooked and seasoned as a salad, which is the tastiest way. Some dry it. Its meat is tenderer than octopus meat. 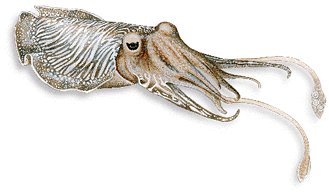 A cephalopod with a wide, elongated body, flattened on the top, with an internal shell. When in danger it releases black fluid, in addition to its ability to merge with its surroundings by changing its skin colour and relief. It can usually be found on sandy and muddy sea beds, hiding during the day and hunting at night. Its meat is slightly tougher than calamari meat and not as sweet; it is prepared mostly as pilaf.